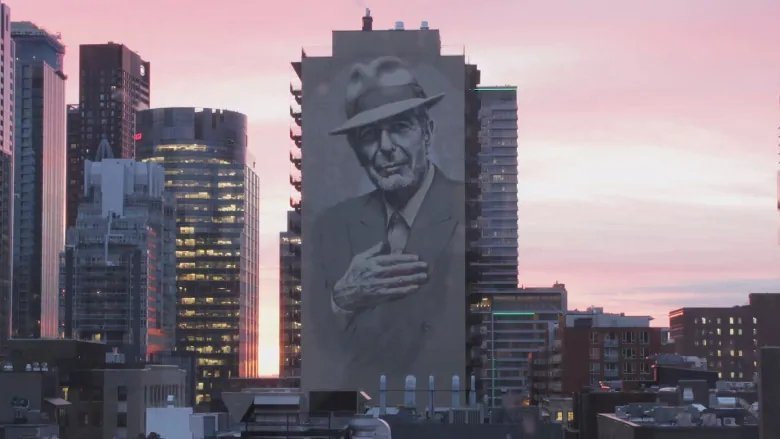 It’s the 7th November 2017. I am a little breathless and I am standing on top of Mont Royal, taking in the panoramic view of the steadily pulsing atrium of downtown Montréal. I have just completed my midterms at McGill University, and the first snowflakes of a five-month snow-down are about to fall. This marks a year since Montréal-born Leonard Cohen passed away.

I scan the high-rise and spot the ghost of this poet-preacher looking back at me with those knowing eyes, haloed by that signature fedora, holding his hand on his heart in a warm gesture of acknowledgment. This towering mural has been inaugurated in time for the celebrations of remembrance that are about to take place all over the city. It covers one thousand square metres and is based on a family photograph taken by Cohen’s daughter, Lorca.

Saint-like and celestial, Cohen gazes over the winding streets of Montréal, an omniscient watchman of the city in which he was born. I think of the great distance between our locked eyes, marked not only by physical proxemics, but by the spiritual distance mediated by paintbrush, camera flash and the lens controlled by someone else’s eye. Despite the dwindled aura of this reproduction twice removed, this mural allows any city dweller to share vicariously in his daughter’s gaze, in the impression of familial intimacy.

I come to sit at a vintage Wurlitzer organ which blossoms out into a kaleidoscopic conglomeration of speakers. I hold down individual keys, each for the length of a semibreve; Cohen arises, reciting fragments from the Book of Longing. I touch his voice, and he speaks only to me. I start to layer my composition, conjuring a cloudy cacophony of Cohens.

There is a crack in everything, that’s how the light gets in.

I untangle the mess I’ve made, lifting each finger until the single voice remains. For just a moment, I almost feel like the ‘I’ to Leonard’s ‘thou,’ until I break contact and a ripple of applause pulls me back to earth from behind. I blush and move on from my impromptu performance, winding through the passages of the first major exhibition on ‘pop’s poet laureate’ at the Musée d’art contemporain de Montréal. I sink into his oxymoronic nickname and wrap myself in three luminous walls of footage playing out Leonard’s life thrice over from different starting points.

We witness Cohen walking along a Grecian landscape with Marianne at his side, then meditating in Mount Baldy Zen Centre where he would be ordained as a monk, and finally crooning under the bright lights of a Dionysian rock-star setting for thousands of fans. These snapshots shouldn’t make sense in juxtaposition, but Cohen’s self-deprecation (‘Needless to say / I am one of the fakes’) coupled with the self-satirising of his designated stardom (‘I was born like this, / I had no choice / I was born with the gift / of a golden voice’) allows him to reconcile these images; he finds creative freedom in the space between the inside and outside of fame, within and without his ‘Tower of Song.’

I look down at my shirt stamped with a fragment of Cohenalia: ‘There is a crack in everything, that’s how the light gets in.’ I wonder whether I’m just another starry-eyed cog in the aura-mashing machine of posthumous music reproduction, complicit in the consumerist wringing of Leonard’s life-blood from beyond the grave. But I don’t linger on the thought, as I’m standing high in the Bell Center stadium, waiting for Cohen’s tribute concert to begin. We form a congregation: a cathedral for Cohen. The blue hue of my phone forms another star within a glittering milky way. I snap Sting, I film Lana Del Rey, I try to capture the ventriloquism of Cohen’s celebrity. My impulse is to preserve this memory, because nowadays your unmediated corporeal presence doesn’t prove very much. But then Cohen’s son, Adam, stands alone on stage and we stop seeing through our screens; we lower our phones as he starts to sing ‘So Long, Marianne.’ He becomes a blood vessel through which his father sings to us for the last time. Cohen feels indexed (almost alive) through his son’s physically and spiritually inherited aura. This is the only hologram I’ll ever accept, for this rendition transcends the age of mechanical reproduction; Adam restores his father to the realm of the biological.

But for all these sites of memory which capture Leonard’s legacy, I feel the closest to Cohen simply by walking down the streets on which he grew up. The home Cohen made of Montréal surpasses walls, doors, floors and ceilings. His spirit, his music and his words linger in the kind-hearted life on street corners (it was always easy for me to find my way home). The changing seasons of Montréal seem to mimic the way Cohen’s voice transformed over time, from the higher-toned lethargy and alluring charisma of a young and passionate poet, then melting into the rumbling snow-deep gravel of this man’s golden voice. For Montréal’s citizens, Cohen is entangled with their urban identity; he ‘embodied his native city, its multiple cultural identities, the poetry of its potholes and imperfections.’ The enveloping counterpoint and tidal chord progressions of ‘Suzanne’ do really take you down the winding streets of the city.

Just as Cohen’s grave always has footsteps leading to it even after heavy snowfall, Montréal’s aura is foot-printed by the mutual celebration of its icon. It’s so warming to live in a city, often fraught with cultural tensions between the Anglophone minority and the Francophone majority, that can find peace in Cohen’s cross-cultural appeal. It’s serendipitous that the year of his remembrance coincides with Montréal’s 375th anniversary; it seems fitting that when we celebrate Cohen, we are celebrating the short history of this city.

I make my way to my favourite clothes shop on Saint Laurent Boulevard, underscored by the Songs of Love and Hate. I turn the corner and notice for the first time another mural which aims to memorialise but with a different tone. I see a woman’s head ringed with stars and birds in flight. Miles of natural landscape unfold behind her and a candle lights the lids of her closed eyes. Above her head, ‘Justice for Missing and Murdered Indigenous Women’ can be read. This mural is not simply a static site of memory and mourning, but it’s an activist statement calling for cultural survival. Even in a city that ostensibly celebrates linguistic and religious diversity, it’s easy to forget the lasting colonial legacy of Turtle Island which still manifests in horrifying and overlooked ways. I think of Marx via Vertov, and bring them up to date: celebrity is now the opium of the people.

Many of Cohen’s commemorative projects are funded by the ‘Society for the Celebration of Montréal’s 375th anniversary.’ Perhaps the resurgence of Cohen’s secular sainthood is as much a political justification of Montréal’s settler existence as it is an act of remembrance, reinforcing Canada’s culture of colonial amnesia. It’s a dark reminder that my Montréal, a place that I now consider home, is built upon the stolen territory of the Mohawk people, upon a forced homelessness. I pause my music, for once silencing Cohen in the city where he doesn’t stop singing. I think about how the people we are encouraged to listen to can mask the things we ought to see and the people that we see can shape who we listen to. But then I also think of the way in which the mechanisms of celebrity could be used to draw attention to issues of social justice, to decentralise the dogma of Eurocentric cultural memory.

Marx (n.d.) Marx, A Contribution to the Critique of Hegel’s Philosophy of Right 1844.

Popova, M. (19/03/2018) I and Thou: Philosopher Martin Buber on the Art of Relationship and What Makes Us Real to One Another. Brain Pickings.

Phoebe Graham graduated with an integrated Masters in Liberal Arts from the University of Bristol. She majored in English Literature, and has wider research interests in History, Cultural Memory and Theatre & Performance Studies. Phoebe works at the intersection of arts activism and the politics of memory, and is a senior editor at Liberal Arts Org.