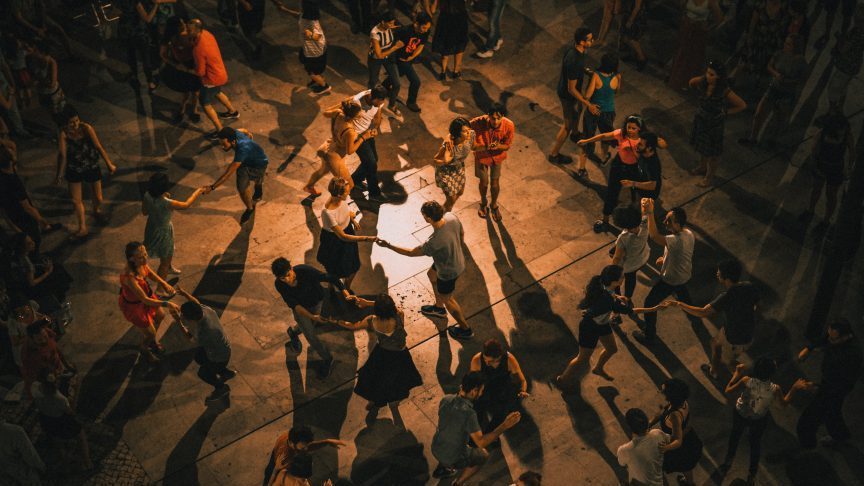 Dancing is a human universal, but why? It is present in human cultures old and new; central to those with the longest continuous histories; evident in the earliest visual art on rock walls from France to South Africa to the Americas, and enfolded in the DNA of every infant who invents movements in joyful response to rhythm and song, long before she can walk, talk or think of herself as an ‘I’. Dancing remains a vital, generative practice around the globe into the present in urban neighbourhoods, on concert stages, as part of healing rituals and in political revolutions. Despite efforts waged by Christian European and American colonists across six continents over 500 years to eradicate indigenous dance traditions and to marginalise dancing within their own societies, dancing continues wherever humans reside. Any answer to the question of why humans dance must explain its ubiquity and tenacity. In so doing, any answer will challenge Western notions of human being that privilege mind over body as the seat of agency and identity.

Current explanations for why humans dance tend to follow one of two approaches. The first, seen in psychological and some philosophical circles, begins with a human as an individual person who chooses to dance (or not) for entertainment, exercise, artistic expression or some other personal reason. Such approaches assume that dance is one activity among others offering benefits to an individual that may be desirable, but not necessary, for human well being. Alternatively, a raft of sociological and anthropological explanations focus on community, asserting that dancing is one of the first means by which the earliest humans solidified strong social bonds irrespective of blood lines. In these accounts, dancing is eventually replaced by more rational and effective means of social bonding that the dancing itself makes possible, such as language, morality and religion. While the first type of reasoning struggles to explain why so many humans choose to dance, the second struggles to explain why humans continue to dance. What is missing from these accounts?

What if humans are the primates whose capacity to dance (shared by some birds and mammals) was the signature strategy enabling the evolution of a distinctively large and interconnected brain, empathic heart and ecological adaptability? And what if dancing plays this role for humans not just in prehistoric times, but continuing into the present? What if humans are creatures who evolved to dance as the enabling condition of their own bodily becoming?

Recent evidence for such a thesis is gathering across scientific and scholarly disciplines. Time and again, researchers are discovering the vital role played by bodily movement not only in the evolution of the human species, but in the present-day social and psychological development of healthy individuals. Moreover, it is not just bodily movement itself that registers as vital in these cases, but a threefold capacity: to notice and recreate movement patterns; to remember and share movement patterns; and to mobilise these movement patterns as a means for sensing and responding to whatever appears. This threefold capacity is what every dance technique or tradition exercises and educates.

According to the New York University neuroscientist Rodolfo Llinás, writing in the book I of the Vortex (2001), bodily movement builds brains. A brain takes shape as it records patterns of neuromuscular coordination, and then remembers the outcomes in terms of pain or pleasure, emotional tags that help it assess whether to mobilise that movement again, and if so, how.

In so far as bodily movements build the brain, every movement a human makes matters. Each repetition of a movement deepens and strengthens the pattern of mind-body coordination that making that movement requires; and the repetition also defines avenues along which future attention and energy flow. Every movement made and remembered shapes how an organism grows – what it senses and how it responds. From this perspective, every aspect of a human bodily self – from chromosomal couplet to sense organ to limb shape – is a capacity for moving that develops through a process of its own movement making. An arm, for example, develops into an arm by virtue of the movements it makes, beginning in utero. These movements pull its bones and muscles into shape, as contracting cells build the physiological forms needed to meet the movements’ demands.

Further support for this thesis comes from anthropologists and developmental psychologists who have documented the importance of bodily movement to infant survival. As the American anthropologist Sarah Blaffer Hrdy affirms in her book Mothers and Others (2009), human infants are born premature, relative to their primate cousins: a human foetus intent on emerging from the womb with the neuromuscular maturity of an infant chimpanzee would need to stay there for 21 months. Instead, hopelessly dependent human infants must have a capacity to secure the loyalty of caregivers at a time when their sole means for doing so is by noticing, recreating and remembering those patterns of movement that succeed in connecting them to sources of nurture. In a view shared by Hrdy and others, this capacity for the responsive recreation of bodily movement forms the roots of human intersubjectivity. In other words, infants build their brains outside the womb in relation to mobile others by exercising a capacity to dance.

Recent research on mirror neurons further supports the idea that humans have a unique capacity to notice, recreate and remember patterns of movement. More abundant in the human brain than any other mammalian brain, mirror neurons fire when a person notices a movement, recreating the pattern of neuromuscular coordination needed to make that movement. In this way, humans can learn to recreate the movement of others – not only other humans, but also trees and giraffes, predators and prey, fire, rivers and the Sun. As the neuroscientist V S Ramachandran writes in his book The Tell-Tale Brain (2011), mirror neurons ‘appear to be the evolutionary key to our attainment of full-fledged culture’ by allowing humans ‘to adopt each other’s point of view and empathise with one another’.

Nevertheless, the term ‘mirror’ is misleading; it hides the agency of bodily movement. A brain does not provide a passive reflection. As eyes register movement, what a person sees is informed by the sensory awareness that his previous movements have helped him develop. He responds along the trajectories of attention that these previous movements have created. From this perspective, dance is a human capacity, not just one possible activity among others. It is a capacity that must be exercised for a person to build a brain and body capable of creating relationships with the sources of sustenance available in a given cultural or environmental context. To dance is human.

In this light, every dance technique or tradition appears as a stream of knowledge – an ever-evolving collection of movement patterns discovered and remembered for how well they hone the human capacity for movement-making. Most of all, dancing provides humans with the opportunity to learn how their movements matter. They can become aware of how the movements they make are training them – or not – to cultivate the sensory awareness required to empathise across species and with the Earth itself. In this regard, dance remains a vital art. From the perspective of bodily becoming, humans cannot not dance.

Kimerer L. LaMothe is a dancer, philosopher, and scholar of religion. A pioneer in the field of religion and dance, Kimerer is the author of numerous articles and six books, including Why We Dance: A Philosophy of Bodily Becoming (2015) , as well as Nietzsche’s Dancers: Isadora Duncan, Martha Graham, and the Revaluation of Christian Values(2006). Kimerer earned a PhD in Religion from the Graduate School of Arts and Sciences at Harvard University and taught at Brown and Harvard Universities.